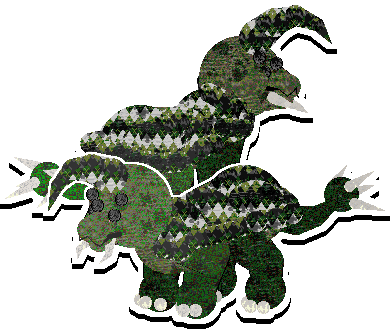 Attribute: Watchful
Element: Surrender
Size: Large, sizable adults are mountable.
Diet: Fabric scraps, the older the better. Brand new fabric will be outright refused by most Snugglebugs.
Abilities: Can distort TV and radio static to form words and sounds, allowing for communication with people. Snugglebugs are also comforted by this noise, and are easy to tame with its aid.
Care: Snugglebugs need safe but spacious environments, preferably with objects/structures to mess around with. Static source is preferred for more direct communication, but not necessary for raising.
Location: Populated areas, most common in rural ones with older structures.
Social Groupings: Solitary aside from parents rearing their young, though other Critz tend to flock to them for warmth and comfort.
Taming Method: Offer the Snugglebug one of its favorite items, showing that you have watched over it just as it has watched over you.
Music Lure: TV Static

Snugglebugs have a strange carapace, seemingly made out of moth-eaten knit fabric. The body of a Snugglebug is made out of similar fabric, albeit more firm and without holes. It seems particularly attracted to the sound of laughter and gatherings of people, but remains out of sight as long as possible. If given the opportunity, this Critz will interfere with structures and objects around a gathering place, such as rearranging the place settings at a tea party. It's unknown what this Critz aims to achieve through doing so. When not observing people from a careful distance, this Critz sleeps, filled with energy the moment it wakes up. It moves with great care through its environments to avoid knocking things over or piercing them with its spikes.

The carapace of a Snugglebug can be lifted, allowing smaller creatures to lay underneath it, not unlike a blanket. Those who are bonded enough with their Snugglebugs may be able to do so as well, making for a comfortable shelter while on the go. These Critz make their nests out of found objects, often amassing a hoard of specific objects they find enjoyable. A Snugglebug in the wild can often be seen shaping its nest with its spikes, pushing aside brush and litter in order to make a cleaner space. 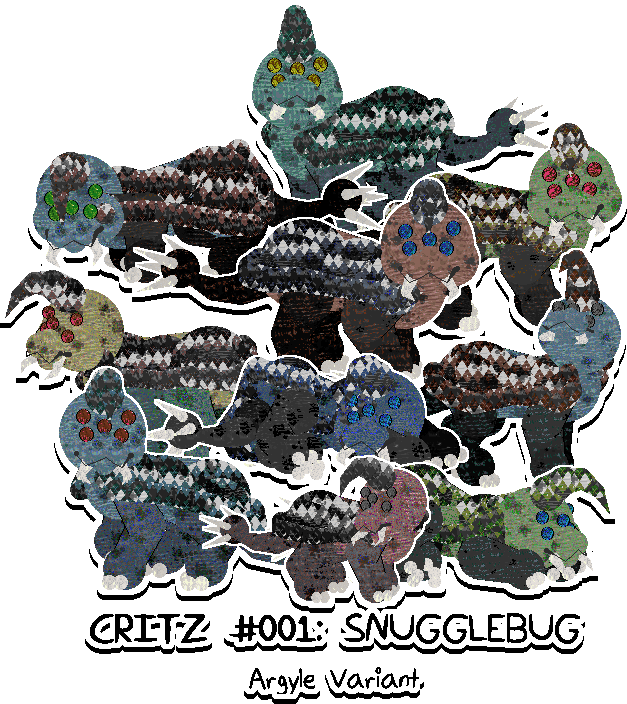 The Argyle variant of Snugglebug is the most sociable out of any of the variants, and while still content to observe from afar, taming one of these Critz is easier due to their willingness to approach people. Argyle Snugglebugs are more likely to accept gifts that are a little off the mark of their favorites. If given a radio or television to manipulate, Argyle Snugglebugs are incredibly chatty, and capable of holding long conversations. Despite their soft bodies, these Snugglebugs are very active, and can often be seen tripping over themselves. 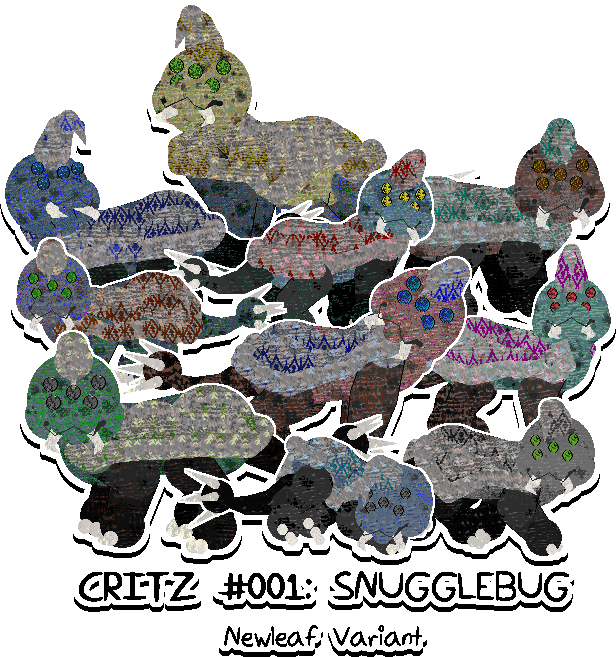 The Newleaf variant of Snugglebug is very low energy and sleepy, with the majority of its day spent resting in a safe, secure place. These Snugglebugs value their environments more than others, finding a single place to stay and sticking to it. As such, it can be hard for those looking to tame a Newleaf Snugglebug, as many are reluctant or outright refuse to leave their chosen homes. Gifts, as a result, should be extremely precious objects to the Snugglebug in order to persuade it to leave. Finding one of these Snugglebugs is not difficult with the use of a portable radio, their humming coming through the noise the closer one gets. 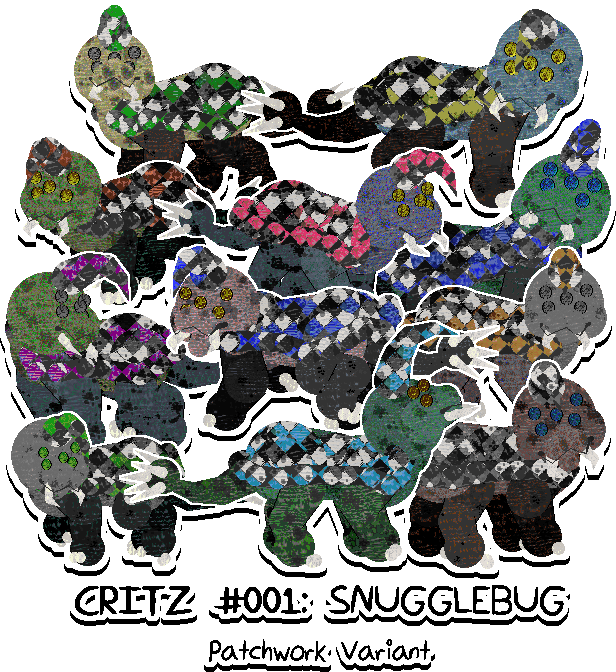 The Patchwork variant of Snugglebug is a hungry one, seeking out fabric scraps with great enthusiasm. Some thrift store owners have even woken up to find their stores ransacked, little holes left in all of the old clothing. These Snugglebugs always leave a gift behind, however, presumably as some sort of apology. Patchwork Snugglebugs are prone to gathering hoards of things that they enjoy, moreso than other variants. Touching a Patchwork Snugglebug's hoard without express consent will not result in hostility, but will make even the most thought out gifts rejected. 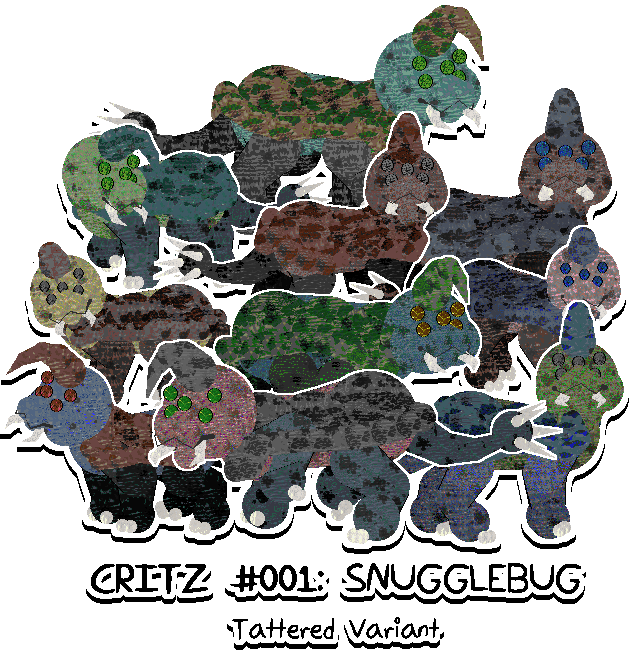 The Tattered variant of Snugglebug is the weakest out of any known variant. Its carapace and skin are easily torn and often full of more holes than others, leading it to have cautious behavior around people and other Critz. This makes these Snugglebugs especially hard to tame, as they are most likely to run away instead of allowing contact. Some Tattered Snugglebugs even see gifts as a threat, supposedly because of their paranoia over being watched and possibly harmed. It takes a lot of coaxing to get these Critz to use radios or televisions, despite the fact that it's just as soothing for them as any other.